Q1. What is the theme of the poem?

Answer:  The theme of the poem “Dreams” is the importance of holding onto dreams in life. Dreams are essential for dynamic life. Life without ambitions and dreams is hopeless.

Q2. How important do you think dreams are? Explain.

Answer:  I think dreams are very important for a hopeful and successful life. The dream is a source of hope and pleasure which enables us to obtain success. Dreams give us the courage to bear the hardships of life.

Q3. Identify an example of a word or phrase that is repeated in the poem and explain why the poet makes this repetition.

Answer:  The poet repeats the word/ phrase “Dream” and “if dream die” because he wanted to emphasize the importance of dreams in human life.

Q4. Identify an example of personification. Explain what is being personified and how?

Answer:  personification: when a poet gives human qualities to non-human things that is called personification. This figurative device has been used in the poem “Dreams”. The poet has Personified life to a broken-winged bird that cannot fly without dreams.

Q5. Identify lines containing metaphors. What ideas are being conveyed by these?

Q6. List the alliterative words from the poem “Dreams”?

Answer:  Alliteration: when all the words of a line or a sentence start with the same letter. This is called alliteration. In this poem “Dreams Die” is alliterative words

Q7: How is the imagery used in this poem?

Answer:  The poet has beautifully used the figurative device of imagery in this poem. He uses words like “broken-winged bird” “barren field” and “field frozen with snow” to make images in the mind of readers.

Q8. What is the mood of this poem? How does it make you feel?

Answer:  The mood of this poem is sad. However, the poet encourages the readers to hold fast to their wishes, desires, and goals because without Dreams life is dull and bleak.

B. Write the correct option in the following statement.

Transitive and intransitive verbs
A. Do as directed

A. Write the verb in parenthesis in the correct form (present or past participle)

The theme of the poem rests on the piece of advice given by Langston Hughes to his readers that they must own some dreams meaning that they should have aims, desires, and goals to achieve in life. If one does not have any goals in his life then his life seems to be dull and unproductive.

How important do you think dreams are? Explain. 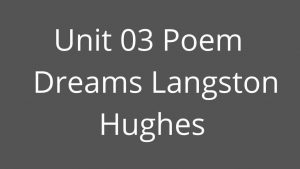 Dreams play a vital role in the life of an individual because it is the power of dreams for achieving something in life that makes a person active, wise and busy as all the time he focuses on something important that must be done by him to gain confidence and success and thus receive appreciation or encouragement by people.

Identify an example of a word or phrase that is repeated in the poem and explain why the poet makes this repetition.

The phrase “hold fast to dreams” is repeated in the poem. It is repeated by the poet as he wants to put emphasis on the importance of dreams in our lives. He is asking people to have dreams, goals, and objectives in life and they should stick to them to remain alive and active.

Identify an example of personification. Explain what is being personified and how?

Langston personified the life without dreams as the bird that is alive but has broken wings thus unable to fly. The poet says that losing a dream or simply have no aim or goal in life is just like a barren land covered with snow that has no life and nothing grows on it to be used by the others.

Identify lines containing metaphors. What ideas are being conveyed by these metaphors?

Lines 3, 4′ and ‘7,8’ contain the metaphors ‘broken-winged bird that cannot fly and ‘barren field frozen with snow.’ A thought-provoking idea is conveyed through these metaphors that if one does not own dreams in life then his life is just like a bird that has wings but is broken and due to this it cannot fly. Similarly, life without dreams is dull and dry just like barren fields that are covered with snow and grow nothing. Such a life has no joy and beauty.

The alliterative words in the poem are:
(i) dreams, die
(ii) broken, bird
(iii) field, frozen

How is imagery used in this poem?

In this poem, the powerful imagery is constructed by the poet through the use of metaphors i.e. ‘broken-winged bird that cannot fly and ‘barren field frozen with snow.’ Through these metaphors, it becomes easy for the readers to know the importance of dreams in their life. The readers are able to acknowledge that if they do not have aims and objectives in their lives then they have no positive purpose to live and their life would become dull and handicapped.

What is the mood of this poem? How does it make you feel?

The mood of the poem is optimistic in nature. After reading the poem, the readers feel a sense of responsibility and they become enthusiastic about life. They plan to have some dreams in their life for which they should struggle and thus play a positive, constructive role.

Q.1) Keeping in view the main points of a persuasive essay, write an essay having a thesis sentence: “A dream doesn’t become reality through magic; it takes sweat, determination, and hard work.”

Life is not as simple as we consider it. It must have dreams, aims, and objectives to achieve otherwise if an individual is devoid of any such feelings of goals then his life is as dull as a barren land with no productive outcome. An individual’s life must own a dream or dreams for that he keeps himself busy and active to attain success. Though dreams are important in life, according to Colin Powell “A dream doesn’t become reality through magic; it takes sweat, determination, and hard work.”

Labour and determination is the success of mankind. Without these, it’s impossible to achieve the desired goal in any sphere of life. Charles Carlson once said, “You are successful the moment you start moving toward a worthwhile goal.” Keeping this in mind, it becomes quite clear that the moment is very precious when you start working upon the goal of your life. Because it gives you strength, passion, courage, and determination to struggle and get success.

Let’s take a simple example of a student that if he is determined to get a good score in his exams, he needs to work hard day and night to achieve it. Whereas if there is a student who always runs away from studies, definitely has no desire to get good marks and for sure has no determination towards studies. Therefore, one can say that labor and determination are just like a clap of hands as it’s not possible to clap with a single hand. So, if one is determined about something only then he would know the importance of labor in achieving his objectives and making him stand out from the rest of his fellows.

According to Suzy Kassem, “A heart without dreams is like a bird without feathers.” This concept is also strengthened by Langston Hughes in his poem ‘Dreams.’ A person who is not passionate enough is like a bird that has no feathers or broken wings that make it unable to fly high in the air. Similarly, an aimless person is also a hopeless person who has no desire to do anything positive in life to be appreciated or encouraged.

The world is full of superb examples of such determined personalities who not only had a dream but who worked hard to get to it. Starting from the example of our beloved Holy Prophet (P.B.U.H) who had a dream to have an enlightened Islamic society. He (P.B.U.H) suffered a lot of hardships but with passion and endurance achieved his pious goal.

Then we must not forget the sincere, tiresome efforts of our founder Quaid-e-Azam Muhammad Ali Jinnah who followed the dream of Allama Iqbal and worked with full zeal and zest, day and night and thus became successful in getting a separate country for the Muslims of the sub-continent just due to his determination, courage, hard work and sincere efforts. The list of such persons having high aims and their struggle towards achieving them.

In the nutshell, it is an evident fact that in the first place an individual must have a dream and then see his dream turn into a reality, he must put all the ingredients of his sincere efforts, determination, enthusiastic feelings into the recipe of success.

Q.2) Research the life of a famous person who faced obstacles during his/her life. Describe the obstacles and how the person overcame them.

The Real Story of Dream Achievement of John and Washington Roebling
John Roebling is a name famous in the world of engineering and innovation. He was the one who put forward the unique idea of building a magnificent suspension bridge that would connect the city of New York with the Long Island (Brooklyn).

Later on, the bridge is titled Brooklyn Bridge. Roebling’s idea of the suspension bridge was the exceptional one as it seems to be an impossible task to be carried on. All over the world, the bridge-building engineers thought that his idea could not be functional and it couldn’t be done. Made with the soil of self-confidence and determination, John Roebling just ignored the remarks of other engineers who said that it was an impossible idea and simply it could not be done but he knew deep in his heart that yes it could be done. He wanted to turn his dream into reality with determination, courage, effort, intellect, and obsession.

Although Roebling was discouraged by the fellows of his field still he had a vision, he had a dream to achieve. He was so obsessed with his dream that he discussed it with his son Washington, who too was an engineer. Both of them started the project with full enthusiasm and fervor. Few months passed when a catastrophic accident happened at the construction site that not only took the life of the mastermind of the project John Roebling but made his son paralyzed to such an extent that he was unable to walk, talk or move.

After the incident, people remarked to them as crazy beings. Even after becoming a handicapped person, Washington never thought of pushing back the idea of Brooklyn Bridge from his mind. He wanted to execute his father’s dreams. He was able to move only one finger and he made use of that to the fullest. A unique idea clicked in his mind to adopt the method of non-verbal communication. For that purpose, he used to tap his finger on his wife’s arm and give his message.

After developing a distinctive code of communication with his wife, Washington started to work on the Brooklyn project once again with full zeal and zest. He tapped on his wife’s arm and gave her a message to call the engineers who were appointed by Joe Roebling for the construction of the bridge.

Then he used the same method of non-verbal communication of tapping her arm to tell the engineers what to do and how to complete the project. Although it was a difficult, time-taking task and seemed irrational, the Brooklyn project was completed this way in a long time of 13 years. Finally, the Brooklyn Bridge becomes a tribute and monument for the efforts of the engineers and the love and devotion of Washington’s wife who unwittingly decode the messages.

Unit 04 Population Growth and its Impact On Environment”