A. Answer the following questions.

Q4: What, in your opinion, is the significance of the Masjid of Cordoba to present-day Muslims? Explain.
Ans: The Masjid Cordoba is a symbol of the past glory & greatness of the Muslims & their dominance over Europe. It takes us to the golden age of Islam which provided enlightenment to the dark ages of Europe.

Q5: Why did Iqbal greatly appreciated a faraway Masjid in Spain, when there were superb buildings of the Muslim era in the sub-continent?
Ans: Iqbal greatly appreciated the great Masjid of Cordoba to tell the present-day Muslims the glory, strength & greatness of Muslims and Islam in Europe. The Masjid is the outstanding symbol of faith and also the finest work of Muslim Art.

B. Choose the correct option.

Choose the correct type of adjectives to fill in the blanks.

D. Use the nouns given in parenthesis to form adjectives.

Where did Abdur Rehman I import fruit trees and other plants from?Why?

What can we achieve again if we enkindle in ourselves the master-passion (Ishq)?

We can achieve the exalted state of moral and spiritual character if we enkindle in ourselves the master-passion (Ishq).

What is the view of Iqbal about the Masjid of Cordoba? Explain his view in your own words.

According to Iqbal, the Masjid of Cordoba is built by those who were in deep love or had Ishq with their Creator, Allah Almighty. Iqbal considered Ishq as a feeling that has a burning desire to one’e utmost in order to achieve one’s ideal of perfection and self realization through the moral teachings of Islam. Iqbal says that it is this passion of that era Muslims and the power and glory of the Masjid of Cordoba that extend their dominance to far off lands. Iqbal is of the view that the beauty and grandeur of the Masjid reflects the intense love and reverence of Mard-e-Khuda towards the ultimate Creator.

What, in your opinion, is the significance of the Masjid of Cordoba to present-day Muslims? Explain.

The Masjid of Cordoba is of vital importance to the present-day Muslims because when they pay a visit to it or just get a chance to read about it, they will be moved not only by its architecture and glory but they are able to feel the glory of Islam and dominance of Muslim in the European world.

Why did Iqbal greatly appreciate a faraway Masjid in Spain, when there were superb buildings of the Muslim era in Sub-Continent?

Iqbal greatly appreciated a faraway Masjid in Spain i.e. the Masjid of Cordoba because he had a desire to pay tribute to the Ishq of the builders of the Masjid. It was a sort of pilgrimage that he paid to an outstanding symbol of faith. He wanted to experience the grandeur and glory of Muslim era when Muslims ruled Spain which further became a source of providing roots to the enlightenment of Europe. He was so moved with the architecture and glory of the Masjid that he expressed his feelings in the form of a poetic piece ‘the Masjid-e-Qurtaba.’

Q.1) Imagine yourself to be standing in the middle of the prayer hall of the Masjid of Cordoba; now develop a paragraph in spatial order on what you see around you.

While standing in the middle of the prayer hall of the Masjid of Cordoba one can be amazed to be around 857 columns of the Masjid with a superb view of two-tiered symmetrical arches. These arches are made of stone and red bricks. In the prayer hall, the horseshoe arched mihrab is the center of attraction for the visitors along with the Qibla wall of the mihrab. Two lines of calligraphy in kofic style catches the attention of people that are inscribed on the arch and Qibla wall of the mihrab both on the top and either side of the arch.

The two lines of calligraphy have a mosaic of a blue background with gold letters, on the other hand, the single line of calligraphy over the arch is mosaic having a golden background with blue letters. The beauty of the mihrab is enhanced by the repeated floral designs of plants in dark blue, reddish-brown, yellow and golden rays of light. One can identify a dome over the mihrab that is built of crisscrossing ribs creating pointed arches. They are all extensively and beautifully covered with gold mosaic in a radial pattern.

Write an expository essay showing comparison and contrast between the Masjid of Cordoba and the Badshahi Masjid.

For Muslims Masjid is the most important place where they can pray and find peace of mind and soul. All over the globe, wherever the Muslims make their move, they establish either a simple or a lavish masjid that facilitates them in their daily five times prayer. In Indo-Pak subcontinent, one of the outstanding landmarks is the Badshahi Masjid built during Mughal era some 400 years back. Similarly, the Masjid of Cordoba in the European state of Spain stands with all its glory and grandeur representing the architecture of 784 C.E.

The Masjid of Cordoba served as a Church before Muslim Amir Abd-ur-Rehman I who converted it into a masjid. The most notable element of the Masjid of Cordoba is its giant arches with over 1,000 columns made of jasper, onyx, marble, and granite. What distinguishes the Majid of Cordoba from any other Masjid of the world are the double arches as they were considered a new architectural feature.

Not only this, the rich and exquisite design patterns mark it standing as one of the most alluring masjids that exist. Apart from this, another outstanding feature of Masjid of Cordoba is the horseshoe arched mihrab present in the prayer hall. It was basically a common feature in the architecture of the Visigoths. Later it eventually spread across North Africa from Morocco to Egypt and is an easily identified characteristic of Western Islamic architecture. The dazzling dome above the mihrab catches the attention of the visitors as it is built of crisscrossing ribs that create pointed arches all lavishly covered with gold mosaic in a radial pattern.

The Badshahi Masjid of Lahore is a clear representation of Muslim architecture. The mosque’s full name “Masjid Abul Zafar Muhy-ud-Din Mohammad Alamgir Badshah Ghazi” is written in inlaid marble above the vaulted entrance. The main entrance gateway is the unique feature of the masjid, it is a two-storey edifice built of red sandstone elaborately decorated with framed and carved panelling on each of its facades. Red sandstone is a notable feature that makes this masjid different from others. Prayer hall, courtyard, minarets all are made of red sandstone. The masjid has three white domes that are the signature of Mulsim architecture of a masjid.

Masjid holds a significant place in the life of Muslims therefore, they must be built keeping in view their glory and grandeur and people must offer their prayers in a masjid to make it alive in true letter and spirits. 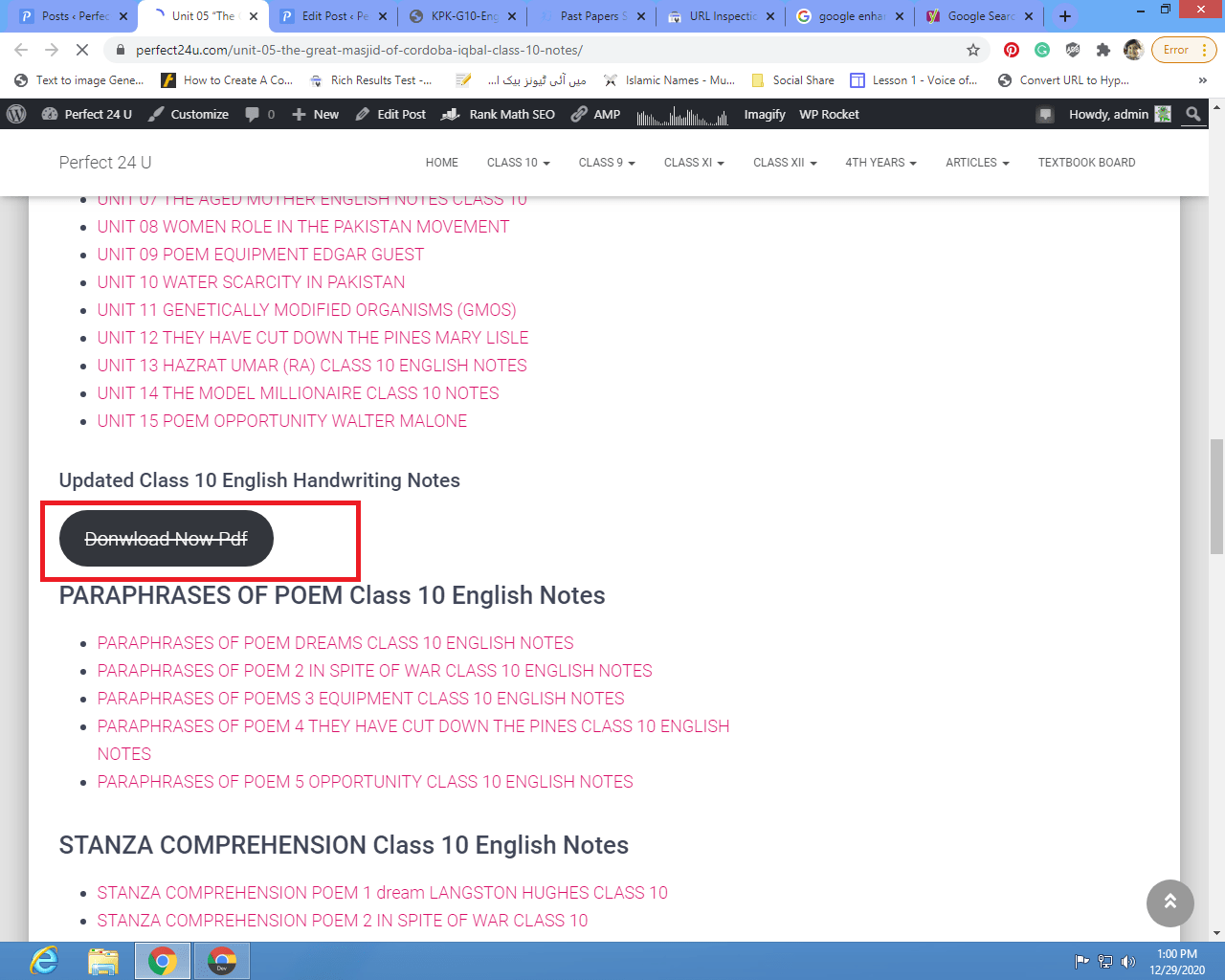 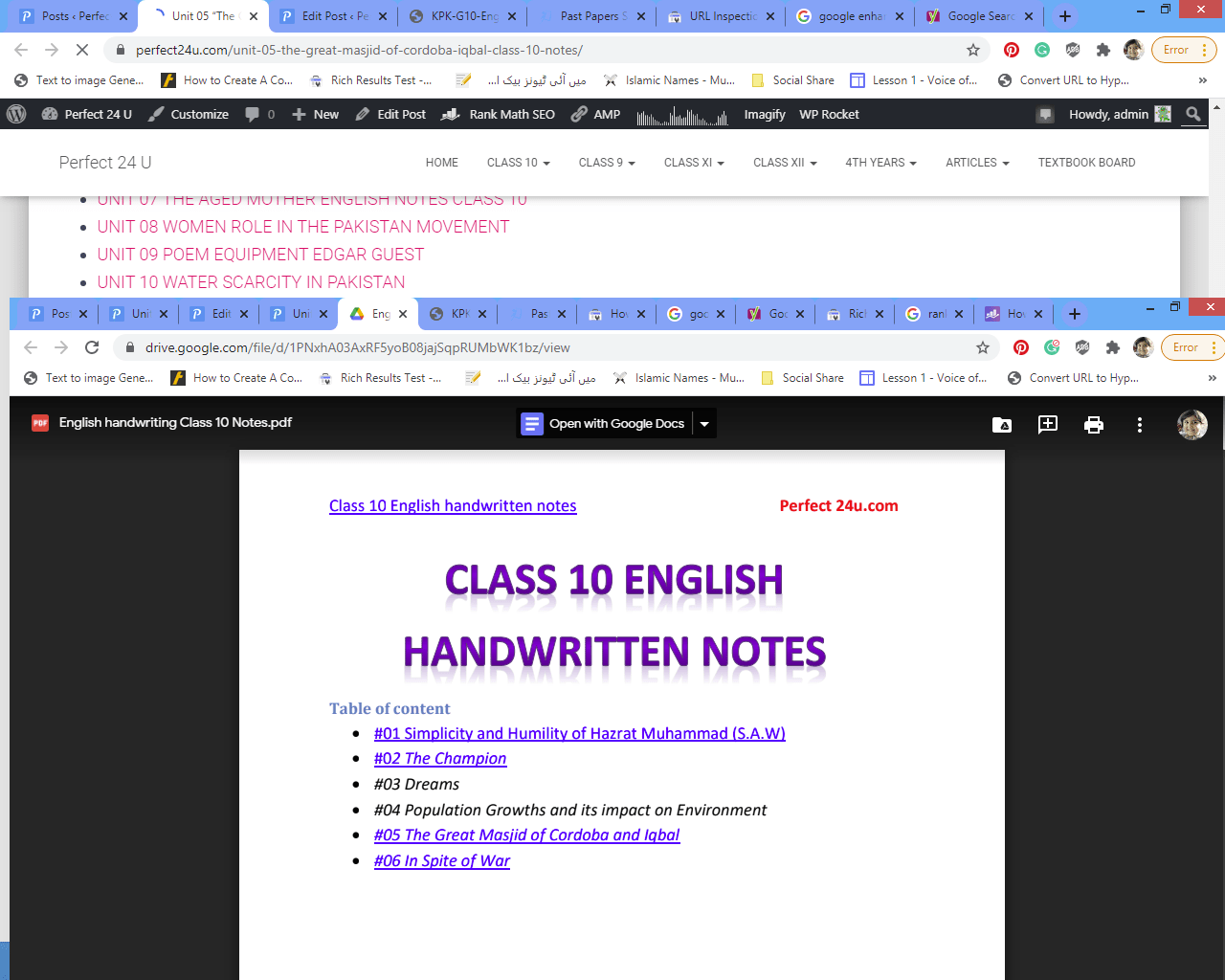 Unit 04 Population Growth and its Impact On Environment”