How many independent countries are there in Africa?

Africa being the second largest continent of the world owns more than thirty-five independent countries. In the past, this particular continent is well-known by the name of “Dark Continent”.

What sort of a country is it?

Nigeria is blessed with fertile land that’s why it is basically an agricultural country. Most of the population of Nigeria consists of farmers who live in villages.

Where do most Nigerian farmers live?

Being associated with the profession of farming, cultivation and agriculture, most of the farmers of Nigeria live in villages. Their villages are located in the bush. An average Nigerian village comprises of a dozen to about three dozen huts where farmers reside with their families.

What is the bush area made up of?

Nigeria is a land that is covered with dense forests which thins out in bushes in the North. The bush area is comprised of scattered trees with heavy undergrowth. The villages of the farmers are scattered in the bush where they cultivate their lands.

What is the center of activities? 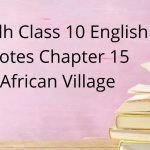 In the beginning a farmer’s hut comprise of only one room but with the passage of time, it becomes bigger with the addition of two or three rooms in a single hut. The center of activities is the courtyard of a Nigerian farmer’s hut. It is a place where women and children spend most of their time in the day and men join them at the sunset after returning from their work. Women work and cook food in the courtyard whereas children love to play over there.

What is the roof of a farmer’s hut made of?

The Nigerian farmers live in huts that are simple but artistically built with the help of trees branches accompanied with a number of other natural materials such as sticks, straws, grass, reeds or palm leaves. The farmers stick thick branches of trees in the ground in the form of a large circle. At the top, these branches are tightly bound together. With this bondage, the hut gets a cone like shape. The spaces which are present in between the branches of trees are filled up with straw and the roof of the hut is thatched with a thick layer of straw, grass, reeds or palm leaves.

What are their cash crops?

Nigeria not only produces the crops for its own use but exports it to other countries as well to earn foreign exchange. The major cash crops of Nigeria includes oil palms and cocoa trees.

What are their food crops?

Being an agricultural country, Nigeria is famous for its crops. The food crops include plantains, potatoes, yams, groundnuts and pepper.

Who tends the food crops?

The women of Nigeria work side by side to their men. They not only do household chores but tend the food crops too so to assist their men in agriculture.

Who tends the cash crops?

The Nigerian men being associated to the profession of farming and cultivation are responsible to tend cash crops as these crops need more hard work and time too.

What is made from cocoa beans?

Cocoa beans are the fruits of cocoa trees. When these cocoa beans are grounded in the form of powder then this powder is used to make the world favorite chocolate.

B. Learn the meanings and spellings of the following words from the lesson and use ten of them in sentences of your own:

C. a) Find for each word in list “A” a word or phrase similar in meaning from list “B”

C. b) Find for each word in list “A” a word or phrase similar in meaning from list “B”

Answer:
Note Only oral activity, no exercise to be attempted.

E. a) Fill in the blanks with shall, will, should, would:

1. I think 1 shall go to Karachi next week.
2. You should not tell a lie.
3. We will fight to the last man.
4. This office will remain open till midnight.
5. I shall be grateful if you kindly grant me a pass.
6. The train would have arrived by now.
7. Shall our motherland need it; we should lay down our lives for it.
8. You should respect your elders.
9. Had you been there, it would never have happened.
10. They should not violate any condition of this contract.

E. b) Fill in the blanks with appropriate prepositions:

1. Please introduce me to your father.
2. He is not acquainted with my parents.
3. This machine is fitted to an automatic control.
4. You are not fit for this job.
5. A round nail does not fit to a square hole.
6. He has passed the examination and is now looking for a job.
7. The police are _____ the look _____ for the robbers. (seem incorrect)
8. Look for the meaning of this word in the dictionary.
9. He promised to look into this matter.
10. We look up to you to solve our problems.

1. A road links his village to the town.
The town is linked to his village by road.
2. A snake in the grass stung his barefoot.
His barefoot was stung by a snake in the grass.
3. He cannot rear any cattle on his farm.
His farm is not meant to rear any cattle by him.
4. Their father settled the dispute between the brothers.
The dispute between the brothers was settled by their father.

Answer:
The hut of a farmer in Nigeria is quite unique. It basically consists of a single room in the beginning but later on the hut becomes bigger with the addition of three to four rooms. The walls of the hut are made by using thick branches of trees tied at the top like a cone and they are filled with different natural materials such as reeds, straw, grass and palm leaves to protect the inhabitants from weather. It has a compound that is the center of attraction for all.

Answer:
The life of a Nigerian farmer and his wife is as busy and active as the life of any other ordinary farmer. Both of them work really hard for their survival. The farmer has to leave his hut early in the morning to work in his fields whereas his wife gets busy in finishing her household chores such as cooking, washing, cleaning etc. She then goes to the field to help her husband in seeding, cultivating or harvesting the crop. She basically takes care of the food crop as it is quite easy to do. From there, she returns to her home, takes care of her children and after sunset gets busy in little chit chat with her husband and children to relax.

3. Describe the changes that are coming or are likely to come soon in the life of the bush-dwellers in Nigeria.

Answer:
Life is ever-changing its dimensions not only for the inhabitants of cities but for the innocent dwellers of the villages too. Same is the case of Nigerian villages. Some years back, Nigerian farmer cannot think about any of the modern facility in his locality. But now with the passage of time, modern facilities in the filed of transport, communication, agriculture, irrigation are being introduced in Nigerian villages to make the lives of the bush dwellers easy and comfortable. As soon as the roads will make their appearance on the land of Nigerian village, the farmer would see and experience the noise of transport, poles of electricity, construction of tube-wells, voices and pleasant music from radios and televisions, children cheerfully returning to their homes from schools, hospitals, doctors and nurses taking care of the sick and ill. Then the Nigerian farmer would be able to relate himself with the urban people quite easily.

Answer:
They were not all sorry when he died. They just shed crocodile tears.

Answer:
Being the only educated man in that village, I feel like a fish out of water.

Answer:
The plot to overthrow the government was detected to be nipped in the bud.

Answer:
The teacher pardoned the boy on the conditions that he promised to turn over a new leaf.