Why was the village decorated?

The village was brightly decorated with buntings and colourful flags as the annual fair was in full swing.

Why was it the best time to visit the village?

According to Bilal, it was the best time to visit the village as the annual fair was going on. It was the time for fun, excitement and enjoyment for all the villagers and the outsiders too.

What kinds of shops had been set up for the fair?

A large number of temporary shops had been set up for the fair. Some of the most prominent one includes jewelry, pottery, farming tools, toys, milk churners etc. People were quite excited as they got the chance to buy their desired items at a reasonable price.

What was the use of these shops for the villagers?

These temporary shops were quite useful for the villagers as a large number of people came there from far off places too in order to buy and sell their goods. It was the best time for them to have great business as people were busy in doing shopping from there.

What were the different entertainments in the fair for the children?

The fair was a source of great entertainment for the children. Most of the children were gathered around the swings and merry go-rounds and waiting earnestly for their turns. Apart from swings, conjurers, jugglers and acrobats were there performing different tricks and thus attracting the children towards them. All time favorite monkey man was there too along with his naughty monkey who was busy in catching the attention of the children by performing variety of stunts and amusing performances.

How did the juggler entertain people?

The juggler was enthusiastically and energetically entertained the people through different tricks in the village fair. One of his popular juggle was that he was juggling with seven balls at a time and the most amazing part was that he was doing it without dropping any one of them.

How did the conjurer perform his tricks?

The conjurer performed an exciting trick by using Bilal’s handkerchief. He took the handkerchief and tore it into pieces. On returning, Bilal was amazed to see it as a whole without being damaged even a little bit.

Tent-pegging is one of the famous sports people used to play at fairs and festivals. In it wooden pegs are fixed in the ground and the riders have to pull them out with their lances as they ride by at a gallop. It is a tiring but interesting sport.

What made the dogs run in the dog race?

In order to make the dogs run fast and compete one another in the dog race, they were made to run after a rabbit. They had to chase and catch it. They were quite enthusiastic for the rabbit but as soon as the dogs came near to it, the rabbit reached the mark safely and vanished under cover to safe itself form the attack of the winning dog.

What was the special announcement?

The special announcement was about the horse races that were about to begin just after few minutes.

Q.1) Learn the meanings and spellings of the following words from the lesson and use ten of them in sentences of your own:
decorated; colourful; annual; competition; performance; household; deafening; temporary; surprise; pottery; acrobat; damaged; entertainers; announcement

Q.1) Complete the sentences with suitable (relative) words given below:

Answer:
1. The drummer who could beat the longest would get a prize.
2. The two friends moved towards a crowd that had gathered in a big circle.
3. The food that we ate was delicious.
4. The man whom we saw climbing the pole had been walking on the tight rope.
5. The rider whose horse had won the face was very happy.
6. I went to the village where my cousin was living.
7. I visited him when the village fair was in full swing.

Q.1) Re-write these sentences, so that they are about the past. Add time phrases as in the example.
Example: He reads beautifully.
He read beautifully in the English period.
1. We do our homework.
2.The pupils write a composition.
3.My friend walks to school.
4.The Headmaster teaches us English.
5.The peon rings the bell.
6.My mother does not sleep well.
7.His brother loses his book.
8.The eagle flies very high.
9.The cobbler sits under a tree.
10.They grow rice on this farm.

Answer:
1. We did our homework in the afternoon.
2. The pupils wrote a composition last week.
3. My friend walked to school yesterday.
4. The Headmaster taught us English in the last period.
5. The peon rang the bell after every class.
6. My mother didn’t sleep well last night.
7. His brother lost his book some days back.
8. The eagle flew very high in the evening.
9. The cobbler sat under a tree day before yesterday.
10. They grew rice on this farm last year.

Q.1) Write a short composition on a fair that you have seen.

Answer:
Last year, I and my family decided to visit my aunt who lived in a village nearby Chakwal. It was the month of March, very pleasant weather of spring when we went there. Actually, my cousin told me that during this period of time, an annual fair held at their village that was really superb and worth seeing too. As I am pretty much interested in fairs and festivals so I insisted my parents go there.
When we reached, my aunt and her family welcomed us warmly. On asking, my uncle told me that from tomorrow onwards the fair would start and continued for a couple of days. I was very excited to experience the fair. It was difficult for me to spend that day. I suffered from sleeplessness that night too. The next day I woke up early in the morning, went for a walk with my cousin, and got ready to visit the fair with my family and relatives.

At 10 o’clock we reached the fair place. I was surprised to see as it was quite a huge fair because it had occupied acres of open land. People were dressed in their best colorful dresses. Children in excitement had a desire to leave their parents’ hands to fully enjoy themselves with their friends. Jugglers, clowns, acrobats, entertainers, performers all were busy attracting the public towards them. A variety of stalls were there displaying clothes, jewelry, toys, food items, shoes, crockery, handicrafts, etc. Women were actively involved in their shopping with loud chit chat. Few steps ahead, a circus was there too. We bought the tickets and watched amazing stunts and performances of not only acrobats but of animals too including lions, elephants, cats, etc. There were different games and sports which attracted people’s attention.

After two hours, we all felt hungry so we moved towards the food stalls and enjoyed the delicious village meal like lassi, parathas, sag, etc. We enjoyed a lot at the fair and after three days went back to our home with unforgettable memories of the fair.

Q.1) Non-textual “The first, second and third prizes are cups.” 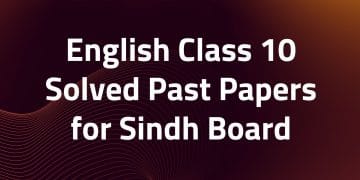 English Class 10 Solved Past Papers for Sindh Board

Explain with the reference of context: (Poem)