Biology is a very important subject for bioenergetics pdf download class 9th for fbise Science students. Now you can study and also online view or download our latest notes of Biology according to the Federal board syllabus to improve your knowledge in a short time and prepared for an examination to obtain smart marks and make your future bright.

How would you define bioenergetics while relating it to the oxidation-reduction reactions in living systems?

Bioenergetics:
“Bioenergetics is the study of energy relationships and energy transformations in living organisms.”
Bioenergetics and the role of ATP:
Organisms obtain energy by metabolizing the food they eat or prepare. The food contains potential energy in its bonds. When these bonds are broken down, a large amount of kinetic energy is usually released. Some of this energy is stored in the form of potential energy in the bonds of ATP molecules while the rest escapes as heat. The potential energy stored in ATP is again transformed into kinetic energy to carry out life activities.
Life processes and constant use of energy:
Life processes in organisms involve a constant flow of energy. This energy flow comprises the acquisition, transformation, and use of energy for various life processes like growth, movement, reproduction, etc.
Bioenergetics and its relation with Oxidation-Reduction reactions:
For all life processes, oxidation-reduction reactions are the direct source of energy. Oxidation-reduction reactions involve the exchange of electrons between atoms.
Definition:
“An oxidation-reduction reaction is any chemical reaction in which the oxidation number of a molecule, atom, or ion changes by gaining or losing an electron.”
Oxidation:
Oxidation is the loss of electrons.
Reduction:
A reduction is the gain of electrons.
Role of electrons in bioenergetics:
Electrons can be an energy source. It depends upon their location and arrangement in atoms.
For example:
When they are present in oxygen, they make a stable association with oxygen atoms and are not a good energy source. But if electrons are dragged away from oxygen and attach to some other atom e.g. carbon or hydrogen, they make an unstable association. They try to move back to oxygen and when this happens, energy is released.
Role of redox reactions:
In living organisms, redox reactions involve the loss and gain of hydrogen atoms. A hydrogen atom contains one proton and one electron, which means when a molecule loses a hydrogen atom, it actually loses an electron, and similarly, when a molecule gains a hydrogen atom, it actually gains an electron.

Interpret that ATP is the chief energy currency of all cells. 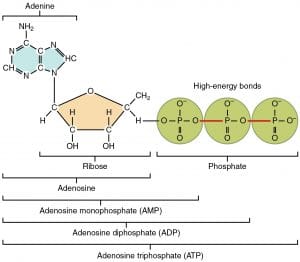 ATP (Adenosine Triphosphate):
“Adenosine triphosphate (ATP) is a complex organic chemical that provides energy to drive many processes in living cells.”
Discovery of ATP molecule:
ATP was discovered by Karl Lohmann, in 1929 and it was proposed to be the main energy transfer molecule in the cell by the Nobel Prize winner, Fritz Lipmann in 1941.
ATP: Cell’s Energy Currency:
The major energy currency of all cells is a nucleotide called adenosine triphosphate (ATP).
ATP is the main energy source for the majority of cellular functions like the synthesis of macromolecules (DNA, RNA, and Proteins) movement, transmission of nerve impulses, active transport, exocytosis, and endocytosis etc.
The ability of ATP to store and release energy is due to its molecular structure.
Structure of ATP:
Each ATP molecule has three subunits:
Read more: Federal G9 Biology Notes Cha 5 Cell Cycle Pdf

Adenine; A double-ringed nitrogenous base.
A Ribose; A five-carbon sugar
Three phosphate groups in a linear chain

ATP; High energy bond:
The covalent bond connecting two phosphates is indicated by the tilde (~) and it is a high-energy bond. The energy in this bond is released as it breaks and inorganic phosphate (Pi) gets separated from ATP.
Energy released by breaking of one phosphate bond:
The breaking of one phosphate bond releases about 7.3 kcal energy per molecule as follows:
ATP+H2O →ADP+ Pi+ Energy (7.3 kcal/mole)
The energy from ATP is sufficient to drive most of the cell’s energy-requiring reactions. In common energy reactions, only the outermost of the two high-energy bonds break. When this happens, ATP becomes ADP (adenosine diphosphate) and one pi is released. In some cases, ADP is further broken down to AMP (adenosine monophosphate) and P as follows:
ADP+H2O →AMP +Pi + energy (7.3 kcal/mole)
Recycling of ADP:
Cells constantly recycle ADP by recombining it with Pi to form ATP. The synthesis of ATP from ADP and P requires the expenditure of 7.3 kcal energy/mole. This energy is obtained from the oxidation of food. ATP is generated by energy-releasing processes and is broken down by energy consuming processes. In this way, ATP transfers energy between metabolic reactions.

What is the role of chlorophyll and light in photosynthesis? 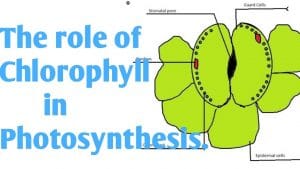 Describe the processes involved in photosynthesis?

When chlorophyll molecules absorb light, their energy level increases and their electrons are emitted.

Electrons are passed to an electron transport chain to produce ATP.

Light also breaks the water molecule (photolysis) and oxygen is released. The hydrogen atoms of water give electrons to chlorophyll and become ions.

The electrons of chlorophyll, after the production of ATP, and the hydrogen ions of water are used for the reduction of NAD+ into NADPH

2- Dark Reactions:
“During the second phase, carbon dioxide is reduced to make glucose. The energy in the form of ATP is utilized in this process and produces ATP in the bonds of glucose. Since these reactions do not use light directly, they are known as dark reactions.”

State how the varying light intensity, carbon dioxide concentration, and temperature affect the rate of photosynthesis?

Respiration:
“Cellular respiration is a set of metabolic reactions and processes that take place in the cells of organisms to convert biochemical energy from nutrients into adenosine triphosphate (ATP), and then release waste products.”
Steps of aerobic respiration:
The process of respiration involves a complex series of reactions.
Aerobic respiration is a continuous process, but for convenience, it is divided into three main stages which are;
1- Glycolysis:
Glycolysis occurs in the cytoplasm and oxygen is not involved in this stage. That is why it occurs in both types of respiration i.e. aerobic and anaerobic. In glycolysis, glucose (6C) molecule is broken into two molecules of pyruvic acid (3C).
2- Krebs cycle:
In the Krebs cycle, the pyruvic acid molecules are completely oxidized, along with the formation of ATP, NADH, and FADH2. Before entering in Krebs cycle, pyruvic acid is changed into a 2-carbon compound called acetyl-CoA.
3- Electron transport chain:
Electron transport chain is the final step of cellular respiration. It is the transfer of electron on an electron transport chain. In this step, NADH, and FADH2 release electrons and hydrogen ions. These electrons are taken up by a series of electron carriers. When electrons move through the series of electron carriers they lose energy, which is used to synthesize ATP. At the end of the chain, electrons and hydrogen ions combine with molecular oxygen and form water.

Draw a comparison of aerobic and anaerobic respiration.

How will you compare respiration with photosynthesis?

Q.1) Why is it said that all life forms are dependent on photosynthesis?

Answer:
Photosynthesis is the process by which plant utilizes the sunlight and oxygen to produce carbohydrates and eventually are the main source of energy for humans and all the consumers on earth. Humans and other animals are heterotrophic and cannot make their own food and must rely ultimately on the glucose produced by plants. Moreover, the oxygen humans and other animals breathe is the oxygen released during photosynthesis.

Q.2) What structures and phenomena are involved in the intake of carbon dioxide and water by plants?

Q.3) In what ways the respiratory energy is used in the body of organisms?

Answer:
Respiration is an anabolic process, during which C-H bonds (glucose) is broken down and this energy is utilized in making ATP which is the energy currency of the cell. ATP is the main energy source used in the majority of the cellular functions as a synthesis of macromolecules  (DNA, RNA, and protein), movement, the transmission of nerve impulses, active transport, exocytosis, and endocytosis.

Q.4) What is the importance of anaerobic respiration?