Physics Notes Cha 10 Properties Of Matter for sindh board

What do you understand by the term elasticity? Define stress, strain and yield point.

ELASTICITY:
When a force is applied to certain objects and they regain their original state after the removal of the force, such bodies are called elastic bodies and this property possessed by them is called elasticity.
EXAMPLE:
A force is applied to stretch a rubber band that regains its original state after the removal of the force. Thus a rubber band is an elastic body. Similarly, a wooden meter scale bends when a force is applied to it. After the removal of the force, it straightens out. Hence such a meter scale is an elastic body.
STRESS:
If a body is deformed and is kept in the state of equilibrium. The apparent force acting on a deformed body is the externally applied force. To keep the body in equilibrium the body must be acted upon by some force other than the external deforming force. This internal force arising from the deformation of the body and acting per unit area of the body is called stress.
STRAIN:
The relative deformation produced in the body is called strain.
YIELD POINT:
The stress at which a material undergoes plastic deformation is called yield point.
NOTE:
For an elastic body, the ratio of stress to strain is a constant and is called the modulus of elasticity.

What is atmospheric pressure?

ATMOSPHERIC PRESSURE:
The atmospheric pressure is the pressure exerted by the weight of the atmosphere on the surface of the earth. 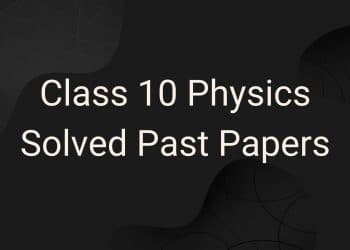 Solved Past Papers Sindh and Karachi all boards class 10th...