1. Can the velocity of a body reverse the direction when acceleration is constant? If you think so, give an example.

So in this case ball reverses the direction of its velocity while having a constant acceleration.

2. A man standing on the top of a tower throws a ball vertically up with certain velocity. He also throws another ball vertically down with the same speed. Which ball will hit the ground with higher speed? Neglect air resistance.

Answer:
Both balls will strike the ground with same speed.
As balls are given same initial speed by the man but one is thrown upwards and the other is thrown downwards. Both balls will move with same speed as both are moving under the action of same gravity which is constant for all bodies.
The only difference is that they both will strike the ground at different times due to different heights.

The second ball will take less time compared to first one, while both balls will hit the ground with the same speed as both of them are experiencing same gravitational force and hence experience a constant acceleration with the magnitude of 9.8 ms-2. 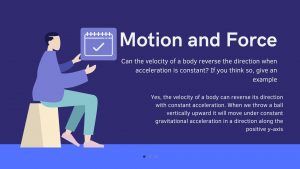 So this is a special case of a motion that the body moving with a constant velocity is having a constant acceleration as well.

4. Define impulse and state how it is related to linear momentum?

Answer:
Impulse is defined as the product of an average force Fav and duration of time Δt during which, the actual force F acts. It is denoted by J and is given as

J = Favg × Δt
Relation of Impulse and Linear Momentum:
According to Newton second law of motion, we have

Putting this value in impulse equation, we get

5. What is head – on collision? Explain with an example.

Answer:
Collision in which point of impact of bodies lies on the same line connecting the center of gravity of each of object is known as a head-on collision. In this collision, the motion before and after collision appears only on a straight line. It is also known as a collision in one dimension.

Example:
Consider two balls of masses m1 and m2 initially moving with velocities v1 and v2 along a straight line. After collision they move with velocities be v1‘ and v2‘ along the same line then such type of collision is called a head-on-collision. Then according to the law of conservation of momentum, we have,
m1v1 + m2v2 = m1v1‘ + m2v2‘

6. For any specific velocity of projection, the range of a projectile cannot exceed from a value equal to four times of the corresponding height. Discuss.

7. What is the angle for which the maximum height reached and corresponding range are equal?

At this angle, maximum height and corresponding range became equal.

8. Aeroplane while horizontally drops a bomb when reaches exactly above the target, but missed it. Explain.

1.What are different types of motion? Explain why the concept of distance/displacement, speed/velocity, acceleration and time are called parameters of motion?

Answer:
Motion:
If a body changes its position with respect to time, then the body is said to be in motion.
There are different forms of motion. Some of them are as follows,

Explanation:
Motion can be described in form of displacement, time, velocity and acceleration. We can say that they are parameters of motion as they all are related to it. We can clear this concept be following explanation
1.      Distance:
If a body moves from one point to another then total length of the actual path between these two points is known as distance. The real path can be a straight line or curve. It explains the movement of a body between two points. It is a scalar quantity.

4.      Velocity:
It is a vector quantity and is defined as the rate of change of displacement of a body. Mathematically it is given by,

5.      Acceleration:
When a body moves with a varying velocity then we say that the body has an acceleration. So acceleration is defined as the rate of change of velocity. It tells us about the nature of motion of a body. This is a vector quantity and mathematically it is given by,

So we can say that displacement, velocity and acceleration can be referred as parameters of motion as they define the complete scope of all processes and activity of motion of a body.

2. Explain displacement – time graph and velocity – time graph. In each type give brief details along with appropriate diagram for illustration.

3. Explain three Newton’s laws of motion. Give example in each case for further elaboration.

Answer:
Newton’s Laws of Motion:
Sir Isaac Newton was one of the greatest scientists and mathematicians. He had new different ideas about motion, which he described in his three laws known as Newton’s laws of motion.

Newton’s First Law of Motion:
This law states that
“A body in motion will remain in motion until some external force stops it and a body at rest will remain at rest until some external force makes it move”
Mathematical Expression:
∑F = F ext = 0
Then,
Acceleration = a = 0
Explanation:
The first law of motion is also known as the law of inertia, where inertia is the property of a body to resist the change. When we apply some force on a body to change its state, then the body resists that change. We can say that all bodies try to remain at their stable state and they resist to change. And as Newton’s first law of motion defines the property of inertia of a body so we also name it as the law of inertia.

Example:
When a cyclist applies sudden breaks, his body feels a thrust in forwarding direction. This is because when he suddenly applied the brakes his lower part of the body also comes to at rest suddenly, as it was in contact with the bicycle. But his upper portion of the body which was still in the state of motion tried to maintain its state due to inertia. So that is the reason that he felt a push in forwarding direction.

Explanation:
It says that whenever there is an interaction between two bodies, each will exert the same force on one another and these forces will be of the magnitude but in opposite directions. Although these force always occurs in pairs they can never neutralize each other.

Example:
When we walk on earth, we exert force on earth in the ward direction. In reaction to our force, the h also exerts and an al amount of force in forwarding direction. This makes it possible for us to walk on the ace of earth.

Answer:
Linear Momentum:
“The product of mass and velocity is known as linear momentum”
Mathematically, it is given by
P = m v
And in vector form it is,

We know that moving objects exert resistive force if they are stopped. Similarly, if two objects of different masses are moving then heavier one will exert more force. This feature of objects was called quantity of motion by Newton and now it is called linear momentum.
Unit of linear momentum is kg ms-1 and it can also expressed as N s.

Let after collision their velocities are v1′ and v2′. If system is totally isolated then let F12 be the force exerted by m2 on m1, then due to this force there will be a change in momentum of m1, given by

5. What is projectile motion? Give examples. Derive mathematical equations for Maximum height attained, time of flight and range of a projectile. State in which condition the range will be maximum if speed of projection is kept constant in a uniform gravitational field.

Explanation:
Consider a body is projected with an initial speed of vi, making an angle θ with respect to horizontal as shown in figure. This body is known as a projectile. It will move under action of gravity and throughout its motion it will have two components of velocity. Horizontal component is vix = vi cosθ and vertical component is viy = vi sinθ.

Following are the main characteristics of a projectile motion:
1.      Horizontal component of velocity remains constant throughout the
flight.
2.      Vertical component changes uniformly and is zero at highest point.
3.      In projectile motion, upward direction is always taken as positive.
Height of Flight (H):
It is the height which a projectile attain during its flight. And in order to
determine the maximum height, we use the following equation of
motion,
2 a S = vf2 – vi2
As height is along y-axis so acceleration will be “a = ay = -g, S = H and
initial and final components of velocity are considered to be y
components. Thus,
2(-g)S = vfy2 – viy2
As the body finally drop to the ground so its final velocity will be zero, so
putting values we get

Time of Flight (T):
It is the time during which a projectile completes its journey from point of projection to the point of impact. In order to derive the expression for the time of flight of a projectile we use the following equation of motion:

As flight is associated with y-axis and as its value is zero t time of flight and also at point of impact, so we take S = 0. Taking vi = viy = vi Sinθ, t = T and a = -g in above equation of motion we get,

So time of flight will be,

Putting value of “T”, we get

Horizontal Range of Projectile:
The maximum distance which a projectile covers in the horizontal direction is called range R of projectile. To determine the horizontal range of a projectile, we use following equation of motion:
S = t
As the horizontal component of velocity remains constant throughout the flight therefore, in above equation we take S = R, = vix = vi cosθ and putting value of t, we get

6. Define elastic and inelastic collisions. Give examples in each case. Derive mathematical equations for calculating the final velocities of the elastically colliding bodies in one dimension.

Elastic Collision:
It is defined as ”the collision in which both momentum and kinetic energy of the colliding bodies remains constant”.

Inelastic Collision:
”Collision in which momentum is conserved but kinetic energy is not conserved is called inelastic collision”.
Derivation of velocities of one-dimensional collision:
Consider two balls of masses ‘m1’and ‘m2’ moving with velocities collide in absence of any external force and after a collision, let their velocities be v1‘ and v2‘, then by applying the law of conservation of momentum to them we get,

1. An object travels 60m in first 6 s. Then keeps uniform motion for next 9 s. In the last 10 s of the journey, it decelerates uniformly to rest. Find the,

a. Maximum speed attained in the journey.
b. Total distance travelled on the whole journey.

2. An object is travelling with a constant acceleration of 10 ms-2. How much distance will it travel in the 3rd second of its journey?

Answer:
Given Data:
Acceleration = a = 10 ms-2
To Find:
Distance travelled in 3rd second = S = ?
Solution:
As body started its motion from rest, so, v1=0
Then from the equation of motion,

In order to find acceleration of body after 2nd second, we get

Then for 3rd second, the ial velocity of the body will be 20 ms-1 with the liberation of 10 ms-2. Then for 1 second of time distance travelled will be given by,

3. A helicopter is ascending vertically at a speed of 19.6 ms-1 When it is at a height of 156.8 m above the ground, a stone is dropped. How long does the stone take to reach the ground?