The formula of Washing Soda is:

Salts that formed by the reaction of a weak acid with a strong base are:

Salts that formed by the reaction of a strong acid with a weak base are:

An ionic compound, that is formed when an acid neutralizes a base, is called:

The number of replaceable [OH] ions present in a molecule of the base, is called:

An acid that produces a large number of (H+) ions in aqueous solution is called:

The number of acidic hydrogen atoms present in a molecule of acid is called:

The acids which contain one acidic hydrogen are called:

When equivalent quantities of acid and base are mixed, salt and water are formed, the reaction is termed as:

D. None of these

The substances which donate the pair of electrons for bond formation are known as:

The substances having a tendency to lose one or more protons are called:

1.  Which one of the following is acidic?

2.  Which one of the following will turn red litmus blue?

3.  Which one of the following will turn blue litmus red?

(a) Pink in acidic medium, yellow in basic medium

(b) Yellow in acidic medium, pink in basic medium

6.  The nature of calcium phosphate is present in tooth enamel is

7.  Which of the following salts has no water of crystallization?

8.  The function of quick lime in soda-lime mixture is too

(b) Increase the efficiency of soda lime

9.  The Ph of a solution of HCL is 4. This shows that the molarity of the solution is

10.  The difference of molecules of water in gypsum and PoP is

11.  Which of the following does not form an acidic salt?

12.  The chemical formula of caustic potash is

13. The energy released in neutralization reaction which occurs between a strong acid and strong base is-

15. If  pHpH of any solution is equal to zero then the solution will be

16. Which of the following is the weakest base?

18. The difference in number of water molecules in gypsum and plaster of Paris is

19. If  pHpH of any solution is equal to zero then the solution will be 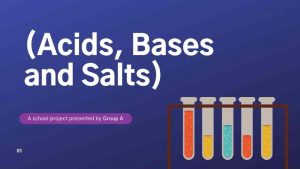 A Swedish chemist Svante Arrhenius, in 1984 placed his acid-base theory. According to this, acid is a species that contains hydrogen and can give hydrogen ions (H+) in an aqueous solution. For example, hydrochloric acid (HCl) gives H+ ion in its aqueous solution. The reaction is,
HCl ⇔ H+ + Cl–
As water accepts the H+ ion, it forms H3O+ as follows.
HCl + H2O ⇔ H3O+ + Cl–
According to Arrhenius, bases are the substances that produce OH– ions when it is dissolved in water. For example, NaOH is a base that gives OH– ions in water.
NaOH ⇔ Na+ + OH–
It also explains when acids and bases react together yield a neutral product salt and water.
HCl + NaOH ⇔ NaCl + H2O
This theory was very helpful to explain some acids and bases, but still, there were some limitations. Like,
i) Arrhenius did not explain the behavior of acids and bases in non-aqueous solutions.
ii) It only applies to substances that produce the only hydrogen (H+) ions or hydroxide (OH–) ions.
iii) Arrhenius’s theory fails to explain acids such as AlCl3, and BF3, which have no ‘H’ atom.

What is Lewis’s theory of acids and bases?

He argued that proton accepts a pair of electrons from OH– to form a covalent bond. According to his theory, any substance that can act as an electron pair acceptor is called a Lewis acid. For example, H+ ion.

Any substance that can act as an electron-pair donor is called Lewis base. This theory expanded the family of acids. For example, any atom, ion, or molecule with vacant valence orbitals can act as Lewis acids.

List the main general properties of acids and bases.

b) Properties of bases:
1) Bases have a bitter taste.
2) Bases have a slippery touch.
3) They change the color of red litmus to blue.
4) Aqueous solutions of bases conduct electricity.
5) They react with acids to form salts. When acids and bases are mixed in the right proportions, the acidic and basic properties disappear and new substances salt and water are formed and the reaction is a neutralization reaction.

c) Strong base:
A strong base is one, that completely dissociates in water and produces a large number of (OH–) ions in water. For example, NaOH is a strong base.
NaOH + H2O → Na+ + OH–

d) Weak base:
A weak base is one, that partially dissociates in water and produces a small fraction of (OH–) ions in water. For example, NH3 is a weak base.
NH3 + H2O ⇔ NH4+ + OH–

Sulphuric acid (H2SO4) is a strong acid, (HSO4) is a weak acid? Account for the difference in strength?

H2SO4 is diprotic acid. It has two H+ ions for dissociation in water. So both H+ ionizes very easily in water so H2SO4 is a strong acid. While HSO4 is monoprotic and its H+ does not ionize in water. So it is a weak acid.

What is salt? Give four examples of Salt?

It is an ionic compound formed by the neutralization of acids and bases. For example,
HCl + NaOH → NaCl + H2O
In this case, HCl is an acid, which reacts with base NaOH and gives a compound known as salt (NaCl) and water. NaCl is also called table salt which is used in our food. Salts are ionic compounds and have high melting and boiling points. For example, NaCl has a melting point of 801°C.

Identify the following as weak or strong acids or bases?

Define molarity? What is a molar solution?

Define pH? Explain why a neutral solution is said to have a pH of seven.

Answer:
pH:
the pH of the solution is defined as the negative logarithm of the hydrogen ion (H+) concentration or (H3O+) ion concentration in moles per liter. Mathematically it is written as,
pH = -log [H+]

Give an equation to show the dissociation of water.

Define the term “Amphoteric”. Give an example?

Amphoteric:
Any substance that behaves both as an acid and as a base is called amphoteric. For example, water reacts with NH3 (base), during this reaction water donate proton and act as an acid.
H2O + HN3 → HN4+ + OH-
However, when water reacts with HCl (acid), it behaves as a base by receiving a proton.
H2O + HCl → H3O+ + Cl–

Calculate the pH of the following solutions. 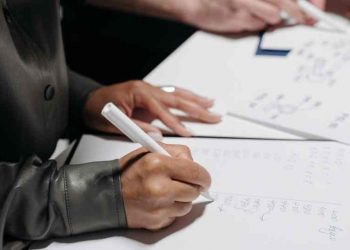