Chemistry, an article that contains many concepts that begin with an individual definition of the least particle in our universe, the so-called ‘atom’. In eighth grade, in common, we all remember that we only have to read a book that combines chemistry, physics, and biology called science.

]But as we enter ninth grade, things are getting more complicated. We got three books instead of just one. And, if you ask me, chemistry is the most complex (maybe not for you). Again, these chemistry notes are enough for class 9.

Understanding chemistry means memorizing many ideas. Also, the concepts of any subject that are usually taught in the ninth grade are the basis on which you can develop in that particular subject. Therefore, we are providing you with the best Chemistry Notes for Class 9.

What is the definition of the atom? 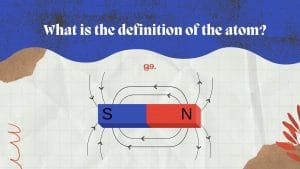 An atom is the smallest part of ordinary matter that forms a chemical component. Every hard, liquid, gas, and plasma is made of neutral or ionized atoms. Atoms are very small, typically about 100 picometers across.

Which particles are heavier than others?

Which particle is the lightest in the following?

The maximum number of electrons in a shell is found out by the formula?

Atomic number shows the number of electrons or protons in an atom and is denoted by?

The mass of an atom is concentrated in the?

Who put forward his atomic model in 1911?

Radioactive rays are of?

The e/m ratio of the ———- rays varies with the nature of gas in the discharged tube.?

Which rays deflected towards the negative pole in the electric or magnetic field.?

Atomic number of oxygen is?

Chemical properties of an element depend on the ———- in the shells.?

Charge on an electron is:

The mass of a proton is:

The mass of an electron is:

Which particle is heavier than others.

Which particle is the lightest in the following :

The nucleus of an atom consists of:

A. Electrons and Protons

B. Protons and neutrons

D. None of these

Answer:
Main points of Dalton’s atomic theory:
John Dalton (1808), an English teacher and scientist proposed the fundamental ideas of atoms. He made some assumptions about atoms, which are:
1) All matter is made of atoms. Atoms are indivisible and unable to destroy.
2) All atoms of a given element are identical in mass and properties. But the atoms of one element differ from the atoms of another element.
3) Compounds are formed by a combination of two or more different kinds of atoms in a simple whole-number ratio.
4) A chemical reaction is a rearrangement of atoms, but atoms themselves are not changed. This means that atoms are neither created nor destroyed in chemical reactions.

Q.2) What evidence is there that electrons are negatively charged particles?

Answer:
In 1895, Sir William Crookes carried out a series of investigations by passing an electric current through gases in a discharge tube at a pressure of 10-4 atm. He was the first scientist to design the discharge tube.
He took a long glass tube having two metal plates connected to oppositely charged poles of a battery. The pressure inside the tube could be adjusted by a vacuum pump. When high voltage current was passed through the gas, shiny rays were emitted from the cathode traveling towards the anode. Since the rays originated from the cathode, they were given the name of cathode rays.

Discuss Rutherford’s gold medal foil experiment? What did it tell about the structure of the atom? 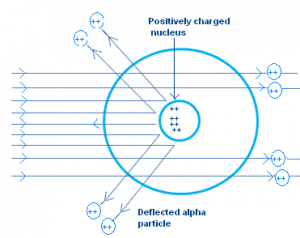 Answer:
Rutherford’s atomic model:
Rutherford’s atomic model shows the existence of the nucleus in the atom, the nature of a charge on the nucleus, and the magnitude of the charge on the nucleus.
Experiment:
Rutherford bombarded alpha particles on very thin gold foil.
Observations:
He observed that
i) Most of the alpha particles were passed through the foil un-deflected.
ii) Very few particles were deflected when passed through the foil.
iii) Few particles were deflected at different angles.
Main postulates of Rutherford’s theory:
i) Most of the particles passed through the foil undeflected, therefore, an atom is 99.99% empty space.
ii) The deflection of few particles proves that there is a large amount of positive charge concentrated in a very small space at the center of the gold atom, which is called the nucleus.
iii) The bouncing back of a few particles shows that the nucleus is very small as compared to the size of the atom and is very dense and hard.
iv) The electrons in the atom are orbiting around this nucleus, like planets around the sun.
v) An atom is a neutral particle, so the number of electrons is equal to the number of protons in an atom.
vi) All the fundamental particles, except electrons, present in the nucleus are known as nucleons.

Answer:
After Planks and Einstein’s discoveries, Niel Bohr, a Danish Physicist in 1913 offered a theoretical explanation of line spectra. The important assumptions for the atomic structure are given below:
1. Neil Bohr adopted Plank’s idea, that energies are quantized. He proposed that the electrons in atoms move only in certain allowed energy levels (energy states), so an electron in an allowed energy state will not radiate energy continuously and therefore will not fall in the nucleus.
2. That the atom radiates energy as a light only when the electron jumps from a higher energy level (E2) to a lower energy level (E1). The quantity of energy radiated is in discrete quantity, called quanta. A quantum of energy is directly proportional to the frequency of the radiation.
i.e. ΔE = E2 – E1 = hv
Where h = Planks constant
v = is the frequency of the radiation.

Q.5) What are protons and how were these produced?

Answer:
Protons are positively charged particles discovered by Goldstein in 1886 by using the cathode ray tube. By fixing the same experimental conditions as by J.J Thomson, he observed the rays originate from anode and travel in a straight line towards the cathode.

Properties of Positive rays:
i) These rays travel from anode towards the cathode.
ii) These rays bear a positive charge because they deflected towards the negative plate when passed through an electric field.
iii) The e/m ratio of the positive particles is much smaller than that of electrons.

Q.6) What are distinguishing characters of electrons, protons and neutrons?

Q.8) What is the proof that all atoms contain electrons?

Answer:
It was observed that cathode rays cast a shadow if an opaque object is placed in their path. This led scientists to a conclusion that these are not rays rather fast moving material particles. These particles were given the name electrons. All the materials produce same particles because nature of cathode rays is independent of nature of gas used in the tube. This means all the materials consist of electrons. And materials are made up of atoms, so electrons are fundamental particles of an atom.

Answer:
In 1902, the English physicist, Ernest Rutherford found out the three types of radioactive rays and described their properties. He placed the radioactive substance in a lead block, between the two oppositely charged plates. The radiations were resolved into three components.

Q.10) Why it is believed that the atom has mostly empty spaces.

Answer:
In 1911, Rutherford fired alpha-particles, given out by polonium, at a 0.00004 cm thick gold foil, and measured the deflection of the particles as they came out from the other side. To detect the particles emitting from the radioactive material he placed a zinc sulphide plate detector behind the gold foil. He observed the following:
i) Most of the alpha particles were not deflected at all. They passed through the foil.
ii) Few, however, were scattered at huge angles.
iii) Even fewer of them bounced back directly.

Q.12) In what way do isotopes of a given element differ form each other?

Answer:
Isotopes:
The atoms of the same element having the same atomic number but different atomic masses are called isotopes.
Examples:
i) Chlorine element has two isotopes 35C and 37C. Both types of chlorine atoms have same atomic number 17 because each type of chlorine has 17 protons. They differ in the number of neutrons. Cl-35 has 18 neutrons and Cl-37 has 20 neutrons.

Q.13) A given isotope of nitrogen (N) contains 7 electrons, 7 protons and 8 neutrons.

Q.14) C-14 and N-14 both have same mass number yet they are different elements. Explain.

Answer:
C-14 is the isotopic form of carbon where it contains 6 protons and 8 neutrons. While N-14 is a nitrogen element having no isotopes.

Q.15) What are the names of three sub-atomic particles? What are their masses in atomic mass units (a.m.u) and what is the unit charge on each?

Q.16) Give the names and symbols for the following elements.

Q.17) How many electrons and protons are there in each atom of the following?

Q.18) How many protons, neutrons and electrons are present in the following atoms? 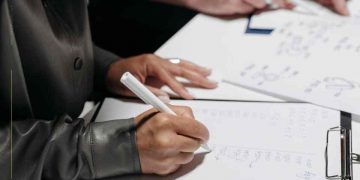