The summary of what the leading scholars and the later scholars have written in the definition of Sahabi is that every believer will be called a Sahabi who, in a state of faith, had the honour of meeting the last of the Prophets, Muhammad (peace be upon him).

He died, and it is clear that the blind children or the newborn children of the Companions who were brought to the service of the Holy Prophet (SAW) all have a meeting, so without hesitation, they will be counted in the group of Companions.

Thus, the pure group of more or less one hundred and twenty four thousand Companions Rizwan Allah Anhum is placed in this category about which the scholars of Ahl as-Sunnah wa’l-Jama’ah and the Imams of the Salaf are unanimously saying that all of them are astrologers of guidance because the Messenger of Allah The Messenger of Allaah (peace and blessings of Allaah be upon him) said: Tirmidhi) The existence of the group

Islam was also introduced by the purely chosen group of the Companions and the Sira-e-Taiba and Sunnah of the Prophet (peace and blessings of Allaah be upon him) were popularized. If people are considered as sinful and disobedient like human beings, then the whole edifice of Islam will collapse, neither the message of the Prophet (peace be upon him) will be valid, nor will the Qur’an and its commentary and hadith remain valid because What Allah’s Messenger (peace and blessings of Allah be upon him) has bestowed on us from the side of Allah has reached us only through the Companions (may Allah be pleased with them). The teacher of humanity Muhammad Arabi himself had trained his selfless obedient companions.

The Companions were made to attend the school of Prophethood by a special order to be present at all times in the service of the Messenger of Allah (peace and blessings of Allah be upon him) to learn Islam, because when a divine command and a law of Shari’ah was given. Therefore, it was obligatory for a group to attend your service and they were also ordered to convey these new rules and verses to those who are not present in the service of the Prophet.

Translation: And Muslims should not leave everyone. So why not a group from every sect that acquires expertise in religion and so as to frighten their people when they return they may have fear.

The fact is that without love and devotion to the Companions, there can be no true love for the Prophet (SAW) and it is impossible to follow the Prophet (SAw) without following the Companions. Because the way of life of the Companions is the very essence of Islam and the followers of Sunnah, and the perfection and beauty of their faith, maturity of belief, soundness and goodness of deeds and excellence of advice and piety have been given to them by the Lord of the worlds. And the teacher of humanity, the Prophet (peace and blessings of Allaah be upon him), in his holy words, praised and praised his martyrs and described their following as guidance and happiness. The Companions (may Allah be pleased with them) were also human beings.

They have also slipped on many occasions according to human requirements, but it is Allah Who forgives the slips, mistakes and sins. He has not only forgiven the reflexive, ijtihad sins of the Companions. By sending this apology in the verses of the Holy Qur’an, did he close the door of criticism and commentary on these holy people till the Day of Judgment? Even after this, if an individual or a group criticizes the Companions, then the scholars of truth have declared them to be narcissistic and misguided. Our entire group of Imams (whether they are Kabar Sahaba or Saghar Sahaba) is Adul.

Take a look at the verses related to the Companions in the Holy Qur’an and then estimate their heights and ranks. Even after this, if anyone has dared to degrade the Companions, he will feel sorry for his misfortune.

The Companions were full of literature and piety
Those who are angry with the Messenger of Allah, may Allah bless him and grant him peace. (Surat al-Hujurat: 2

Translation: Verily, those who keep their voices low before the Messenger of Allah, may Allah bless him and grant him peace, are the ones whose hearts Allah has purified for piety. For them is forgiveness and a great reward.

Translation: And know that among you is the Messenger of Allaah (peace and blessings of Allaah be upon him). If they obey you in many matters, it will be difficult for you, but Allaah has given you the love of faith and has desired it in your hearts. And they hate you with disbelief, transgression and disobedience. Such people are on the right path by the grace and reward of Allah.

Translation: Muhammad is the Messenger of Allah and those who are with him are quicker than the disbelievers and are kind to one another. O addressee, you will see them bowing and prostrating and seeking the grace and approval of Allah. I can see that the marks of his (worship) are visible on their faces due to the effect of prostrations.

In other words, Allah has promised beauty to all of them. Then in Surah Al-Anbiya, He said about beauty: Will

It is not permissible to taunt the Companions
Imam al-Mufassirin Allama Qurtubi, in his famous Tafsir Qurtubi, Volume 2, Page 3, has written: It is not permissible to attribute a definite and definite error to any of the Companions, so all of them in their own conduct Ijtihad was used and their aim was to please Allah. All these gentlemen are our leaders and we are commanded to speak in their differences and always mention them in a better way, because companionship is a matter of great sanctity.

The Prophet (peace and blessings of Allaah be upon him) forbade them from saying bad things and informed them that Allaah has forgiven them and is pleased with them. With reference to the teachings of the Qur’an, vol.
The solution to every problem is to follow the companions

Today we Muslims are facing difficulties on a global scale. There are failures and setbacks on all fronts. The enemies of Islam are united and agree to destroy Islam. Muslims are being accused and slandered in various ways, tarnishing the image of Islam and defaming Muslims all over the world. The media is active in Europe.

There is a wave of hatred against Muslims in Europe. We are going through a dangerous and critical period. In these circumstances, the ideal life of the Companions is a beacon for us. Even these pure people faced these conditions. In some respects, the situation was more dangerous than it is today. Makkah was going through a period of severe trials and tribulations.

The number was small and there were no resources. There were seditions and conspiracies of Jews and hypocrites in Hudaybiyah, the polytheists invaded Makkah and the Jews. There were battles with the tribes, then the scope became wider, then Caesar Rome and Kasra had dangerous intentions.

We will have to repeat the same history with the same strategy and patience with which the Companions faced all these situations. Therefore, it is necessary that we Study them as your guide and follower with this love and devotion Follow that every deed of theirs is pleasing to Allah and His Messenger.

The Companions are the standard of truth and the beacon for us. There is no arrogance in their glory. No one has access to the heights of their greatness. Today, following these gentlemen is more necessary and important than in previous centuries, and the concept of success is not possible without it.

I will suffice to mention a few verses, otherwise, their virtues and virtues are mentioned in many other verses, while in the books of Hadith, Manaqib-e-Sahaba is a permanent chapter in which there are also Manaqib-e-Sahaba individually and collectively. The greatness and majesty of all the companions of the Prophet are also mentioned.

The need to make the impressions of the Companions a beacon 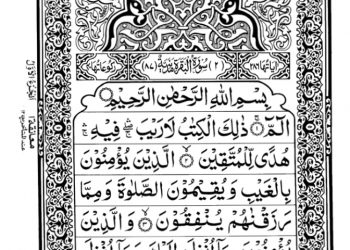