Why is the flywheel of an engine made heavy in the rim? 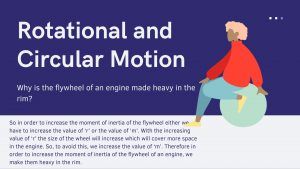 Why is a rifle barrel ‘rifled’?

A rifle barrel is rifled in order to attain stable pointing of bullet so that we can hit the long-distance targets with more accuracy. The barrel has a spiral groove in order to make a bullet spin. For that spin, the bullet gets angular momentum about an axis that is parallel to the barrel of the gun. And as angular momentum is a conserved quantity, it will keep the bullet stable in the targeted direction. So by doing this, we actually increase the efficiency of the gun.

Is it possible for a person to distinguish between a raw egg and a hard-boiled one by spinning each on a table? Explain.

Yes, it is possible for a person to distinguish between a raw egg and a hard boil egg just by spinning each on the table. As for a raw egg, the yolk is denser than the white part of an egg. Therefore, when we spin a raw egg about its axis, its yolk moves away from the axis. So the value of ‘r’ increases which in turn increases the moment of inertia of the egg. So it gets difficult to spin a raw egg about its axis of rotation.
In the case of a hard boil egg, as the yolk is fixed so the moment of inertia of the egg will not increase. So it will be easy for a person to spin it about its axis.

Why is the acceleration of a body moving uniformly in a circle, directed towards the center?

As when we move a body in a circle with uniform speed, its velocity is always along the tangent at any point of the circle. Therefore, the direction of the velocity changes from point to point. This change in velocity is always directed toward the center of the circle. And as acceleration is the rate of change of velocity so that is the reason that centripetal acceleration is always directed towards the center.

A ball is just supported by a string without breaking. If it is set swinging, it breaks. Why?

It is because the ball was suspended with the string such that the weight of the ball ‘w’ was supported by the maximum tension of the string. When we set a ball in swing then it will increase the tension of string beyond its maximum capacity so, it will break the string.

6.    An insect is sitting close to the axis of a wheel. If the friction between the insect and the wheel is very small, describe the motion of the insect when the wheel starts rotating.

7.    Explain how many minimum numbers of geostationary satellites are required for global coverage of T.V transmission.

Answer:
Since to cover whole earth’s surface satellites have to cover 360o of longitude. As one satellite can cover the only 120o of longitude so the minimum number of Geo-stationary satellites required for global coverage of T.V transmission is three.
As,
360o = 3 × (120o).

8.    Explain the significance of moment of inertia in rotatory motion.

9.    Why does the coasting rotating system slow down as water drops into the beaker?

Answer:
The inertia of a body depends on the mass of the rotating body and the distance from the axis of rotation. As beaker gets heavier with constantly dropping of water so its inertia will keep on increasing. And we know that inertia is the ability of a body to resist change, therefore, the coasting rotating system becomes slower as water drops into the beaker.

10.    A body will be weightless when the elevator falls down just like a free-falling body. Explain.

Answer:
The condition for a body to stay in hanging condition with a string is given by,
T = w = mg
Where ‘w’ is the weight of the body which is equal to the product of the mass of the body and gravitational acceleration. But in case of a falling elevator, the tension in holding wire is given by,
T = mg-ma
But if the elevator is falling down just under the action of gravity then the acceleration of the body will also be gravitational acceleration, so tension will be given by,
T = mg-mg = 0
Which shows that if the elevator is falling down freely, then the apparent weight of the falling body will become zero or we can say that the body will be weightless.

11.    When a tractor moves with uniform velocity, its heavier wheel rotates slowly than its lighter wheel, why? Explain.

Answer:
As we know that inertia is given by,
I = mr2
Which means inertia depends on mass ‘m’ of the object and value of the distance from the axis of rotation ‘r’.
In case of a heavier wheel, due to its large value of ‘m’, the inertia of wheel becomes larger which makes its rotation slow as compared to the lighter wheel. This is because the heavier wheel will exert more resistance to rotation due to inertia.

From figure (a), we can say that when θ is very small then point ‘B’ will be very near to point ‘A’ and then we have,
S = vΔt
Putting this value in equation (1), we get

Where left hand side of equation is basically acceleration of the body, so we get

This acceleration is known as centripetal acceleration and is denoted by ‘ac’. Vectorially we can write it as,

Q. 2 Show that angular momentum in magnitude is given by

3. Show that role-playing by mass in linear motion is playing by a ment of inertial in rotatory motion.

Answer:
As kinetic energy (K.E) for a body having a linear motion is given by,

9.    Give different three examples to illustrate the phenomenon of conservation of angular momentum.

Answer:
Law of Conservation of Angular Momentum:
This law states that,
“In absence of any external torque, the angular momentum of a system remains constant”
Examples:
(a): In the circus, a diver leaves the springboard having his arms and legs extended with a small angular speed about a horizontal axis through his center of gravity. Then he pulls his arms and legs in, by doing so he made his moment of inertia smaller. And in order to keep his angular momentum ‘I ω’ constant, his angular velocity increases.

(b): When we whirl a stone at the end of a string, holding its other end in our hand then after some time we stop exerting a force on the string and allow the string to wind on the figure. By doing so the length of the string goes on decreasing and angular speed of the stone will go on increasing. As there is no new torque exerted on the stone, the moment of inertia decreases as total angular momentum remains conserved.

(c): Consider a man standing on a turntable, holding heavyweights in his hands. If he starts rotating slowly with his arms fully stretched horizontally, then upon drawing the hands and weights in towards the chest the angular velocity will increase. Then by stretching his hands again, he can slow down his spinning speed. This is possible due to the law of conservation of angular momentum.

10.    Explain why mudguards are used on the wheels of cycles, motor cars, and other driving vehicles?

We know that for circular motion, the direction of velocity is always along the tangent at every point, so the mud will fly off along the tangent to the wheel.
In order to protect the other body parts of the vehicle from that flying mud manufacturers made the mudguards on the wheels.