Q.1 Explain with the help of an example, what is the range of possible values of the resultant of two vectors?

Q.2 What is the minimum number of unequal vectors to result in a null vector? Explain with the help of a diagram.

Q. 3 The resultant of two vectors, one is double in magnitude than the other, is perpendicular to the smaller force. What is the angle between the two forces?

Explain how cranes are able to lift a very heavy load without toppling? 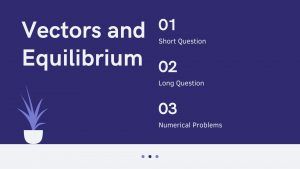 Objects having a high value of the center of gravity are unstable. So, in order to attain stability, the basis of cranes made are heavy so that we can maintain a low center of gravity.
When the objects are lifted by crane torque is produced which is counterbalanced by its longer moment arm and heavy body of the crane.
Therefore, these are the reasons that cranes don’t topple while carrying heavyweight.

Q. 5 The gravitational force acting on a satellite is always directed towards the center of the earth. Does this force exert torque on the satellite.

As we know that torque is given by,

And in case of satellite, the acting force is a gravitational force which is directed towards the centre of earth hence the angle is 0o, so we get.

So this shows that gravitational force does not exert any torque on satellite.

Q. 6 Explain why do buses and heavy trucks have large steering wheels.

As we know that torque is given by,

Q. 7 A point object acted on by forces 4 N, 5 N and 6 N is in equilibrium. If the 6 N forces is removed, what is the resultant force on the object?

Let there be three forces acting on an object in such a way that they are normal to each other as shown in fig (a):

Now if 6N force is removed then resultant of remaining forces will be in xy-plane as shown in fig (b). Now by applying Pythagoras theorem we get resultant force as,

Then resultant force is given by,

So, if we remove 6N force then resultant of remaining two forces will be 6.4N.

1. Define what is meant by vectors. Give five examples of each. Also with the help of an example explain the graphical representation of a vector.Answer:

Definition:
“Those physical quantities, which can be completely described by magnitude as well as specific direction, are called vectors.”
Examples :
Momentum, acceleration, torque, displacement and velocity are some examples of vectors.
Graphical representation of a vector:
Graphically a vector is represented by a straight line with an arrowhead at one end of it. Length of the line gives the magnitude of the vector and arrowhead indicates the direction of the vector.
For example, a student travelled 100m from school towards the east. Then it can be represented graphically as bellow,

Starting point is known as the tail of vector.
End point is called head of vector.

2. Explain in detail whether for two vectors of equal magnitude is it possible to give a resultant of magnitude equal to their individual magnitude. Justify your answer mathematically.

Yes, for two vectors of equal magnitude it is possible to give a resultant of magnitude equal to their individual magnitude.
Proof:

Consider their tails are joined such that they make an angle of 120o as shown in figure above.

Now resolving these vectors into their horizontal and vertical

Putting values of Rx and Ry, we get

Direction of R is given by,

6. Define torque. Explain why it is equal to the vector product of force and moment arm.

Torque:
Definition:
“Turning effect produced in a body about a fix point due to an applied force is called torque or moment of force.”

Explanation:
Torque is that quantity which produces angular acceleration in a body under action of forces. It depends on the moment arm (perpendicular distance between line of action of force and point of rotation) and the applied force. It is a vector quantity and is taken as positive if rotation is clockwise and torque will be negative if the rotation is anti-clockwise.
Mathematically we express it as,
Torque = (Moment arm) × (Effective force)

7. Write the solution steps of a numerical problem of equilibrium.

Following are the steps for solution of an equilibrium related numerical problem:

“If a vector sum of all forces acting on a body is equal to zero then the body is said to be in equilibrium.”

And mathematically it is given by,

2. At many times a body cannot be in equilibrium even the first condition is satisfied. For example, if forces are acting on a body are opposite in direction then these forces will tend to rotate the body in clockwise or anti clockwise direction, disturbing its state of equilibrium. Under such conditions, we solve the problem by using second condition of equilibrium i.e.

Mathematically it is given by,

1. A ship leaves a port P and travels 30 km due north. Then it changes course and travels 20 km in a direction 30° east of north to reach port R. calculate the distance from P to R.

2. A certain corner of the room is selected as an origin of the rectangular coordinate system. If an insect is sitting on an adjacent wall at a point whose coordinates are (2,1,0) in units of metre, what is the distance of the insect from this corner of the room?
(2.2m)
Answer:

3. The magnitude of dot and cross product of two vectors are 6√3 and 6 respectively. Find the angle between the vectors.
(300)
Answer:

4. A load of 10.0 N is suspended from a clothesline. This distorts the line so that it makes an angle of 15° with the horizontal at each end. Find the tension in the clothesline clothes line.
(19.3N)

5. Four co-planar forces act on a body at a point O as shown in figure. Find their resultant.