Q.2 i) List three main functions of a nucleus.

Main functions of the nucleus:

What do you know about peroxisomes? 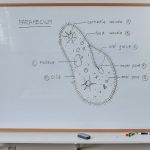 “Peroxisomes are small, membrane-enclosed organelles that contain enzymes involved in a variety of metabolic reactions, including several aspects of energy metabolism.”
“Or”
The peroxisomes are small sub-cellular bodies approximately O.5um in diameter, surrounded by membranes and found in a great variety of organisms, including plants and animals which are also-called microbodies.”
In animals, they are most common in liver and kidney cells.

They are similar to lysosomes, but they are somewhat denser and have different enzyme systems. For example, the enzymes of peroxisomes are known to break down hydrogen peroxide into oxygen and water, protecting cells from its corrosive effects. In the leaves of green plants, photorespiration may occur in peroxisomes.

Q.2 iv) What is cytoskeleton. Why is it considered to be an important organelle in the cell?

Cytoskeleton: “The cytoskeleton is a structure that helps the cells to maintain their shape and internal organization, and it also provides mechanical support that enables cells to carry out essential functions like division and movement.”

Q.3 i) Differentiate between a prokaryotic and eukaryotic cell.

Answer:
Plasma membrane (Cell membrane):
Plasma membrane or cell membrane is the outermost boundary of the animal cells and inner to the cell wall in plant cells. The cell membrane is chemically composed of lipids (20-40%) and proteins (60- 80%). In addition, there is a small number of carbohydrates present.
Fluid Mosaic Model:
According to this model, there is a lipid bilayer in which the protein molecules are embedded. The fluid mosaic model is the most acceptable model of the plasma membrane.
Many biologists contributed to establishing the structural organization of the cell membrane. The modem technology has revealed that lipid bilayer is not sandwiched between two protein layers. In 1972, Singer and Nicholson proposed a most acceptable model for membranes called the Fluid Mosaic Model. This model is in agreement with the photograph of the cell membrane by an electron microscope. This model explains that “the membrane is like a sea of lipids in which protein are floating”.

a. Proteins in the plasma membrane:
The proteins are not arranged in a sheet but as globes of proteins which are floating about in the sea of lipid molecules.
Intrinsic proteins:
Some proteins extend completely through the double layer of lipids from one side to the other and are called intrinsic proteins.
Extrinsic protein:
Some other proteins are smaller and are placed between the phospholipids molecules. These are on one side of the membrane and are called extrinsic proteins.
Role of extrinsic protein as receptor:
Extrinsic proteins function as a receptor that receives the stimuli from the environment and thus inform the cell to respond.
Functions of integral proteins:
Integral proteins also called permeases to regulate diffusion, osmosis and active transport of ionic materials.
b. Glycolipids  and glycoprotein in the plasma membrane:
Lipids, proteins, and carbohydrates are responsible for the functional diversity of the membranes. Lipid bilayer makes the membrane differentially permeable barrier that allows the transport of non-polar materials across it and prevents ionic materials.
Membrane proteins, on the other hand, makes it a selectively permeable barrier that select materials according to the cell’s need. If glucose concentration inside the cell s proper, no more glucose can enter the cell.
Functions of glycolipids  and glycoprotein:
Membrane carbohydrates such as glycolipids and glycoproteins provide receptor sites that receive different types of stimuli like hormone receptor sites (HRS), receives nerve impulses, recognition of antigen and food materials thus inform the cell for a response. Membrane carbohydrates are also responsible for endocytosis i.e. phagocytosis (eating of the cell) and pinocytosis (drinking of the cell). Thus glycolipids and glycoproteins act as cell surface markers.

Q.3 iii) What do you know about Golgi apparatus. Describe its functions.

Answer:
Discovery of Golgi apparatus:
The Golgi apparatus was discovered by Camillo Golgi in 1898, using special staining techniques.
Golgi complex:
This apparatus which was found virtually in all eukaryotes consists of stacks of flattened, membrane-bounded sacs called cisternae. These cisternae together with associated vesicles are called Golgi-complex. It is a complex system of interconnected tubules around the central stack.
Dictyosomes:
The Golgi complex consists of units called dictyosomes.
Cisternae:
Each dictyosome is formed of bundles of curved and flattened cisternae, associated tubules and secretory vesicles.
Dictyosome has two distinct faces.

Q.3 iv) What are lysosomes? What role do they play in a cell?

Answer:
Lysosomes:
“Lysosomes are cytoplasmic organelles containing degradative enzymes enclosed in a membrane, found in most eukaryotes and are different from others cytoplasmic organelles due to their morphology.”
Discovery of lysosomes:
These were isolated as separate components for the first time by De Duve in 1949.
Lysosomal enzymes:
They are surrounded by a single membrane and are simple sacs that contain very large variety of food digesting enzymes called hydrolases.
Phagocytosis in lysosomes:
Any foreign objects that gain entry within the cell are immediately engulfed by the lysosomes and are completely broken down into digestible pieces. This process is known as phagocytosis. They are very abundant in those animal cells, which exhibit phagocytic activity e.g neutrophils.
Primary lysosomes:
Lysosomes are bounded by a single membrane and contain numerous hydrolytic and acid phosphatase enzymes. These enzymes are synthesized on RER and are further processed in the Golgi apparatus. The processed enzymes are budded off as Golgi vesicles and are called primary lysosomes.
These contain those enzymes which can digest the phagocytosed food particles. During autophagy (self-eating) some old worn out parts of the cell are also digested. In this way materials of the cell may be recycled and a cell may be renewed. Their enzymes can also result in degeneration of cell, as may occur during the developmental processes.

Malfunctioning of Lysosomes:
Several congenital diseases have been found to be due to the accumulation of substances such as glycogen or various lipids within the cell. These are also called storage diseases and are produced by a mutation that affects one of the lysosomal enzymes involved in the catabolism of certain substances.
Example:

Answer:
Cytoskeleton:
“The cytoskeleton is a structure that helps the cells to maintain their shape and internal organization, and it also provides mechanical support that enables cells to carry out essential functions like division and movement.”
Discovery of Cytoskeleton:
Koltzoff in 1928, by his microscopic studies, suggested the existence of an organized fibrous network of skeleton in the cytoplasm of eukaryotic cells. Later on, Cohen (1977) confirmed the views of Koltzoff by his electron microscopic studies.
According to Cohen, the cytoplasm of the eukaryotic cells contain a cytoskeletal network of different types of microtubules, microfilaments, and intermediate filaments.
Proteins present in cytoskeleton:
The main proteins that are present in the cytoskeleton are tubulin (in microtubules), actin, myosin, tropomyosin, and others which are also found in muscles. Several cell organelles are derived from special assemblies of microtubules, e.g. cilia, flagella, basal bodies, and centrioles.
Cyclosis and amoeboid movements are because of microfilaments, where as intermediate filaments are involved in the determination of cell shape and integration of cellular components.
1. Microtubules:
These are long, unbranched, slender tubulin protein structures.
Functions of microtubules:
One very important function of microtubules is their role in the assembly and disassembly of the spindle structures during cell division.
2. Microfilaments:
These are considerably more thin cylinders made up of contractile actin proteins, linked to the inner face of the plasma membrane.
Function of microfilaments:
They are involved in cyclosis.
3. Intermediate filaments:
They have a diameter in between those of microtubules and microfilaments.
Function of microfilaments:
They help in maintaining the cell shape.

Answer:
Tissue Culture:
“Tissue culture is the growth of tissues and cell separate from the organism that is typically facilitated by the use of liquid semi-solid growth media such as broth, or agar. which results in clones in which all the product cells have the same genotypes unless affected by mutation during culture.”

The procedure of tissue culture: