What is an Enzyme? Describe its different characteristics. 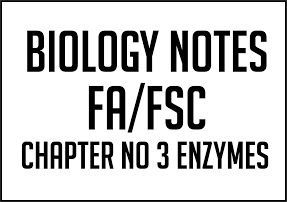 Definition: –Enzymes are complex organic compounds that speed up a biological reaction without any change in itself.” The term enzyme was used by F.W. Kuhne in 1876.

Catalyst:
They act as catalysts and speed up a biochemical reaction.

Protein nature:
Enzymes are partly or completely made up of proteins.

What is a cofactor?

Cofactors – are atoms, groups of atoms and molecules that join with enzymes altering their shape and making them functional. One can think of these cofactors as an” on-off switch for activating an enzyme. If the cofactor is a non-protein like a metallic ion (i.e. zinc, copper, or iron) it is directed to as a prosthetic body. Some cofactors are small organic molecules called coenzymes. Like enzymes, they are not permanently altered in the reactions. Many of these coenzymes are derived from vitamins and minerals that are essential for life. The absence of these cofactors can lead to vitamin and mineral deficiency diseases e.g lack of Vitamin B produces beriberi. Examples of coenzymes are NAD+, FAD+, NADP.

Q.2 ii) What are metal activators? Give three examples.

Answer:
Co-factors (metal activators):
“A cofactor is a non-protein chemical compound or metallic ion that is required for an enzyme’s activity.”
Cofactors are atoms, groups of atoms and molecules that join with enzymes altering their shape and making them functional.
Metal activators:
Metal Activators are cations that are positively charged metal ions.

Example:
K+, Fe++, Fe+++etc.
Prosthetic group:
If the cofactor is a non-protein like a metallic ion (i.e. zinc, copper, or iron) it is referred to as a prosthetic group.
Co-enzymes:
Some cofactors are small organic molecules called coenzymes. Like enzymes, they are not permanently altered in the reactions. Many of these coenzymes are derived from vitamins and minerals that are essential for life. The absence of these cofactors can lead to vitamin and mineral deficiency diseases e.g lack of Vitamin B produces beriberi.

Q.2 iii) Differentiate the key difference between the Lock and Key Model and Induced Fit Hypothesis?

Q.2 iv) How pH of a cell affects the enzyme activity?

Answer:
Effect of pH on enzyme activity:
Every enzyme operates most effectively over a limited range of pH understood as the optimum pH. A small change in pH can revise the ionization of the amino acids at the active site. Moreover, it may influence the ionization of the substrates. Beneath these changed needs enzyme activity is either retarded or stopped completely. Extreme differences in pH cause the bonds in the enzyme to break, resulting in the enzyme denaturation.

Example:
For most enzymes, optimum pH is about 7-8 (physiological pH of most cells) but a few enzymes can work at an extreme pH such as protease enzymes in the animal stomach which have an optimum pH of 1. The pH affects the charge of the amino acids at an active site more specifically, changes in pH ionizes amino acids forming an enzyme so the properties of the active zone change and the substrate can no extended bind.

Q.3 i) Describes the characteristics of enzymes.

Q.3 ii) What do you know about inhibitors of enzymes?

Answer:
Inhibitors:
“An enzyme inhibitor is a molecule that binds to an enzyme and decreases its activity.”
Inhibitors inhibit the action of enzymes, reducing the rate of their responses. They are found inherently but are also used artificially as drugs, pesticides and analysis tools.

Q.3 iii) Write briefly the mode of action of an enzyme.

Answer:
Enzymes:
“Enzymes are proteins that act as catalysts within a living cell to bring about a specific biochemical reaction.”
Structure of enzymes:
Enzymes are proteins, and their function is determined by their complex structure. The reaction takes place in a small part of the enzyme called the active site, while the rest of the protein acts as a framework. The amino acids around the active site attach to the substrate molecule and hold it in position while the reaction takes place. This makes the enzyme specific for one reaction only, as other molecules would not fit into the active site.

1- Lock and Key Hypothesis:
Fischer in 1890 suggested that each enzyme had a particular shape into which the substrate fits exactly. This was known as the lock and key hypothesis. According to this hypothesis, the substrate is imagined like a lock while the enzyme is imagined like a key. As one specific key can open only a specific lock, similarly a specific enzyme can break up only one specific substrate. The active site is regarded as a rigid structure that does not modify or change during the reaction process. However, later studies did not support this hypothesis in all type of reactions and therefore the hypothesis was modified into Induced fit hypothesis.

Q.3 iv) How do the enzyme and substrate concentrations affect the rate of enzyme action.

Notes for Biology Chapter 3 Enzymes pdf Dawnload for kpk board